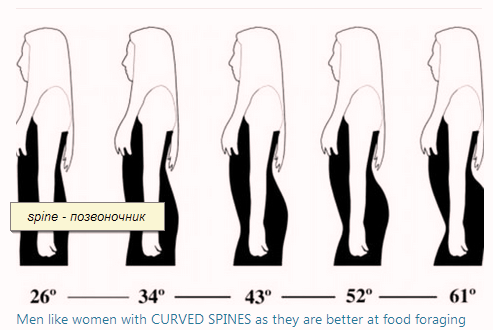 Previous research suggests that men evolved to prefer women with small waists and big hips - signals of youth and fertility. Now a new study adds surprising nuance to the the evolutionary theory behind men's interest in prominent posteriors - or, more precisely, in the curved spines that create them.

"Over the course of human history, women faced the adaptive problem of a forward shifted center of mass during pregnancy," study co-author Eric Russell, a graduate student in psychology at the University of Texas at Arlington, told The Huffington Post in an email. "Women with a greater degree of lumbar curvature ... were able to redistribute this center of mass to reduce the strain of pregnancy. Thus, we hypothesized that men should have a psychological adaptation to prefer these women as mating partners."

In short, male preference for this specific anatomical form likely evolved because it enabled women to sustain multiple pregnancies without injury and to forage productively during pregnancy.

For the study, more than 300 men rated the attractiveness of female silhouettes that
had lumbar curvatures ranging from 26 to 61 degrees.

The men found a moderate curvature - about 45.5 degrees - to be just right. Such a curvature would have conferred evolutionary advantages without presenting health problems like back pain and slipped disks, the researchers said.

The researchers also found the structure of the spine itself, rather than just the buttocks' fat and muscle, is key.

"Men may be directing their attention to the butt and obtaining information about women's spines, even if they are unaware that that is what their minds are doing," Dr. David Lewis, a psychologist at Bilkent University in Turkey and the study's lead author, told the Daily Mail. "Alternatively, men may have preferences for both lumbar curvature and buttock size. Future research is needed to better understand the latter."

The study was published online Feb. 7 in the journal Evolution and Human Behavior. (с) huffingtonpost.com