6 signs your body is telling you something.

Аnd why not to ignore it. 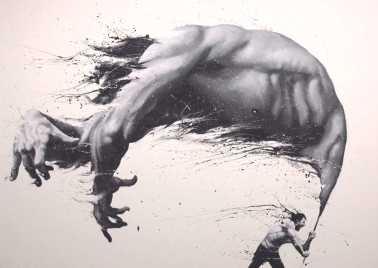 Background: Lips are a reflection of the health and hydration of the entire body. “If you are well hydrated, then your lips will be well hydrated,” says Elizabeth Lipski, PhD, clinical nutritionist and author of Digestive Wellness (McGraw-Hill, 2004). Less water in the body means less moisture for the skin– the body’s largest organ. The delicate tissue of the lips is extra sensitive to drought. “If you are constantly using lip balm or lip gloss to sooth chapped lips, it’s a sign you need to drink up,” says Lipski.

Other signals: Headaches, infrequent urination, dark yellow or smelly urine, dry skin, slow turgor (meaning that if you pinch the skin on the back of your hand, it doesn’t snap right back into place). Although the aging process slows turgor down somewhat, even in older adults it still should return to normal within a second or two.

How to respond: Drinking eight glasses of water a day... can be intimidating, says Swift, so if you’re not able to quaff that amount, you can still get hydrated by sipping herbal tea and working additional servings of fruits and vegetables into your daily diet. “The transition to a more whole-foods diet puts us on autopilot to get more water because they are naturally high in moisture,” says Swift. And, make sure to include whole foods that are rich in essential fatty acids, such as nuts and seeds, avocados, and anchovies and sardines, which help maintain healthy cell membranes and hold in moisture.

2. You’re not getting enough fiber…
One likely signal: Constipation

Background: Constipation is the clearest indicator of the body’s need for more fiber. “Our hunter-gatherer ancestors ate up to 100 grams of fiber a day and had an average stool weight of 2 pounds,” says Mark Hyman, MD, the editor of Alternative Therapies in Health and Medicine and author of The UltraSimple Diet (Pocket Books, 2007).

“Today, the average American eats less than 8 grams of fiber a day, and the average bowel movement is a puny 4 ounces.” That’s a problem, he says, because the bowels are key to the body’s elimination process. When traffic is backed up, toxins from the bowel leach back into the body and can cause a multitude of inflammation-based health problems in everything from your digestion and skin to your heart and brain. They can also disrupt hormonal balance and immunity. The bottom line, Hyman says: “If stools are hard and hard to pass, you’ve got a problem.”

How to respond: Eat more legumes, vegetables, fruits and whole grains. All are chock-full of fiber and other nutrients, making them natural go-to foods. Getting the recommended 35 to 40 grams of fiber a day not only improves bowel health, but it also lowers the risk of diabetes and heart disease, says Andrew Weil, MD, director of the Arizona Center for Integrative Medicine of the College of Medicine at the University of Arizona in Tucson.

If you want other ways to sneak extra roughage into your day, Swift suggests sprinkling rice-bran fiber on salads or oatmeal. She likes rice-bran fiber because it’s gluten-free and has been shown to help eliminate toxins, such as PCBs. Another one of her favorite fiber boosters is a seasoning she makes out of crushed pumpkin seeds, ground flax meal, sesame seeds, kelp flakes and sea salt — basically, a riff on gomasio, which is used as a salt alternative in Japanese cuisine. Put it in a wrap, sprinkle over brown rice or use to garnish soups, she says. “The nuts, seeds and ocean veggies are a nutrient- and fiber-licous powerhouse.” (Keep it in the fridge to lengthen its lifespan.)

3. You have a B-vitamin deficiency…
One likely signal: Cracks at the corners of the mouth

Background: “You see nutritional deficiencies first in those tissues that turn over the quickest, such as the tongue and lips,” says Lipski. Studies show that cracks or sores that appear at the corners of the mouth (a.k.a. cheilitis) may be a sign that your body isn’t getting enough B vitamins. “Deficiencies of one or more of the B vitamins may occur fairly easily,” notes Haas, “especially with diets that include substantial amounts of refined and processed food, sugar or alcohol.”

How to respond: Your best bet is eating a whole-foods diet and prioritizing foods high in B vitamins. The richest dietary source of B vitamins is found in brewer’s yeast or nutritional yeast (although, if you have candida issues, you’ll want to skip those). Other solid picks include wheat germ, whole grains, legumes, egg yolks, sweet potatoes, salmon, red meat, liver and poultry.

Taking a good B-complex vitamin supplement can also be helpful (particularly if you’re a vegetarian). Under the care of a nutritionally inclined health professional, you may also be prescribed a supplement for a specific B vitamin (or even given a vitamin B-12 shot) to help correct a significant deficiency. But be careful mixing up your own B-vitamin cocktails. When taken in excess and out of balance with other B’s, certain B vitamins can wind up leaching nutrients out of your system. That’s why emphasizing B-rich foods should be your first priority.


4. You’re eating something that doesn’t agree with you…
One likely signal: Eczema

Background: First a little background about food intolerances. When the body doesn’t tolerate a food well, ingesting that food creates a chronic, low-level irritation or inflammation in the gut. Over time, with regular exposure, the irritation worsens and creates fissures in the spaces between the cells. (Picture the walls of the gut, once tightly knitted together, looking more like an old afghan.) These holes allow bacteria and their toxins, as well as incompletely digested proteins and fats, to “leak” out of the gut and into the bloodstream. Called leaky gut syndrome (or increased intestinal permeability), this condition sets the stage for myriad health problems, including rashes and skin problems, like eczema.

The skin is the body’s largest elimination organ, notes Lipski, so it’s not surprising that it comes under assault when toxins careen through the bloodstream. “A skin rash or eczema is a sign that the body is trying to slough out these toxins,” she says. “It’s trying to eliminate the problem the best way it knows how.

How to respond: An elimination diet is the best way to pinpoint the offending food. “Start with one or two foods you suspect,” says Swift, who prefers to call this the “illumination diet” because its focus is on “illuminating your health.”

Don’t know where to start? Foods that are most likely to wreak havoc on the gut include wheat and gluten-containing products, dairy products, sugar, soy, eggs, corn and yeast. If you’re uber-motivated, take Haas’s advice and go off what he calls “the big five” for a week: wheat, dairy, sugar, caffeine and alcohol. “It’s not easy to do”, he admits, “but you’re guaranteed to learn a lot about your body’s signals.” You might also consider keeping a food journal. Spend a week or two writing down what you eat and how your body feels in the minutes, hours and days afterward (e.g., an hour after you eat dairy, you feel bloated). “It’s about pattern and symptom recognition and connecting the dots,” says Swift, which in turn helps you decide which foods to eliminate first.


5. You’re drinking too much caffeine…
One likely signal: Fatigue

Background: “Caffeine goes to an already low energy bank account and tries to lend it a little extra energy for the short term,” says Haas. “But it’s getting that energy from your own stores, meaning you have less and less on reserve, leaving you less able to generate your own energy on an ongoing basis.”

Caffeine works by stimulating the central nervous system. Specifically, the chemical gooses the adrenal glands into releasing hormones — namely cortisol and adrenaline that tell the body to go faster. The short-term result can be increased focus and better hand-eye coordination. But overdo caffeine on a regular basis and, eventually, the central nervous system runs out of gas. “If you don’t restore yourself with sleep, nutrients and relaxation, you’ll quickly get into a cycle of whipping a weakened horse,” says Haas.

How to respond: Weil advises limiting your daily dose of caffeine to less than 300 milligrams (mg). As a reference, a 12-ounce cup of Starbucks brewed coffee packs 260 mg of caffeine, while a 12-ounce Americano (two shots of the coffee chain’s espresso added to hot water) contains 150 mg. A 12-ounce cup of black tea, on the other hand, contains roughly 100 mg and green tea only 50 mg. “If you’re going to indulge,” advises Swift, “think about the quality of the source. Are you drinking green tea or a chemical-laden energy drink? What’s a healthy amount for you? Most people know what amount their system can handle,” she says. In the meantime, support your adrenal glands with B vitamins (especially B5/pantothenic acid), vitamin C and licorice. Also, fuel up on healthy, whole foods that boost and maintain your energy.

Background: If you’re low on stomach acid, your body won’t digest foods efficiently, especially dense foods like fats and proteins. When food sits in the stomach, so does the air you naturally swallow when you eat. The air has only two options — get pushed down the digestive tract with food or catch the next flight up the esophagus and out the mouth. The longer food loiters in the stomach, the more likely you’ll burp.

How to respond: Boost the first phase of digestion by becoming a more “sensory-based eater,” says Swift. “That means enjoy the sight and smell of the meal before you dig in so that your gut has time to release digestive factors, such as hydrochloric acid, in anticipation of a meal.” Then, eat more mindfully. Chew your food so that it’s easier for the gut to digest, especially proteins and fats.

If you still feel like your food sits in your stomach like a rock, Haas recommends trying digestive enzymes, which can help you better digest your food. For example, he says, you might try a product called betaine hydrochloride with pepsin (a time-released protein digestant), found at health-food stores.

Hydrochloric acid is the main ingredient in stomach acid. By taking it as a supplement, you’re basically giving your stomach a head start, especially with proteins and fats, which are the hardest food stuffs to digest, meaning they require more stomach acids than carbs. After you begin eating a meal with protein and fat, for instance, take one capsule. See how you feel after a couple of meals. If you feel OK, you can try two capsules and gradually increase to three or four. If you have any sensation of burning or acid indigestion, cut back to a level where you didn’t experience any negative side effects.