Why I'm glad I'll never have to wear a corset. 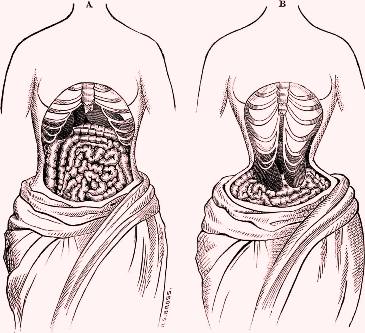 PHOTO: left - healthy female body, right - female body deformed by a corset.
Back in the day of Corsets, women were going for that “Hour Glass Figure”. And by doing so, it meant wearing a string-drawn corset that would literally SQUEEZE the guts out of them. Well, not actually squeeze your guts out, but shove them all down into positions that are not normal, nor healthy!

Strained organs, compressed rib cages, and serious health issues with respiratory, circulatory, and digestive systems are just some of the proven causes from wearing corsets...

In this picture you can see two sketches from 1884 depicting what, at the time, was believed the way the inside of the body looked when wearing a corset.

A corset is a garment worn to hold and shape the torso into a desired shape for aesthetic purposes. The corset has been an important article of clothing for several centuries, evolving as fashion trends have changed. Women, as well as some men, have used it to change the appearance of their bodies.

The corset first became popular in sixteenth-century Europe, reaching the zenith of its popularity in the Victorian era.