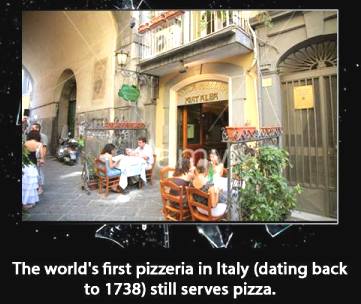 Antica Pizzeria Port'Alba is a pizzeria in Naples, Italy, which is widely believed to be the world's first pizzeria.
First established in 1738 as a stand for peddlers,... Antica Pizzeria Port'Alba was opened in 1830 in the town center at Via Port'Alba 18. The restaurant replaced street vendors who would make pizza in wood-fired ovens and bring it onto the street, keeping it warm in small tin stoves they balanced on their head. It soon became a prominent meeting place for men in the street. Most patrons were artists, students, or others with very little money, so the pizzas made were generally simple, with toppings such as oil and garlic. Antica Pizzeria Port'Alba is still in business today, located between a number of bookstores. It is widely believed to be the world's first pizzeria. via Wikipedia. 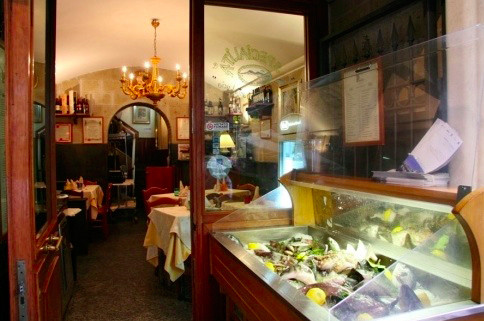 It might be impossible to say who invented the pizza. Evidence of primitive bread dough baked on flat stones can be traced all the way back to ancient Greece and Egypt. Today however, the construction of a pizza is a bit more complicated and most commonly associated with Italy. The Italian city of Naples is regarded as the hub of pizza history because the practice of covering plain flat dough circles with spices, herbs and leftovers began there. The peasants and working-class of Naples appreciated the convenient food that incorporated yesterday’s leftovers and could be eaten without utensils. As a result, Naples is considered the birthplace of what we now consider to be the traditional pizza.

Pizza making in Naples ItalyPlain home-made pizzas were part of the Italian peasant diet for nearly a hundred years before the now essential ingredient, tomatoes, were first placed on them. The tomato was brought to Europe by the Spanish Conquistadores in the late 1500’s, but the plant was mistakenly thought to be poisonous at first, and most Europeans generally avoided it, especially wealthier citizens. It wasn’t until the Italian working-class discovered the joys of adding the new red fruit to their favorite flat bread that the pizza became accepted as a widespread food choice for all classes.

The very first Italian pizzerias are known to have sprung up near Naples in the port village of Port’Alba. Considered as the “yeast of life” and a source of “happy eating,” the pizza quickly became a favorite food. History points to Antica Pizzeria Port'Alba as the earliest known dedicated pizza restaurant in the Naples area. Antica Pizzeria Port'Alba began cooking pizzas in ovens lined with volcanic rocks from Mount Vesuvius in 1738 and the establishment is still open today.

The first pizzas to appear in Naples featuring cheese came about by combining a trio of foods from around the globe at the time. The flat bread concept came from the Greeks, the tomato came from the New World in Peru and the first mozzarella cheese was made from water buffalo milk imported from India. Pizza maker Don Raffaele Esposito was the clever guy credited with putting them all together and in doing so, became the father of the modern pizza. As the story goes, Esposito was called to the Italian royal palace to make a special dish for Queen Margherita.

Don Raffaele served the queen a special pizza with his recipe of mozzarella cheese added to the basil and tomatoes. The resulting red, white, and green-topped pizza mimicked the colors of the Italian flag, and was an instant hit with the Queen. Don Esposito called his creation the Margherita Pizza in honor of the Queen and the popularity of pizzas with cheese on them grew rapidly throughout Italy. By the turn of the twentieth century, some five million Italian immigrants had arrived in the United States and they brought their love of cheese-laden pizzas with them. A tradition was established and the rest, as they say, is history. Today, the pizza is offered with an endless variety of ingredients and served on every continent of the planet. via pizza.com
Tags: особенности разных народов
Subscribe
promo