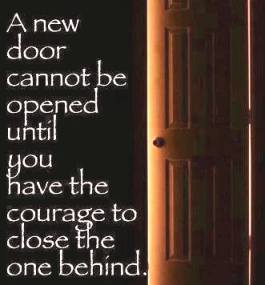 Courage is the quality shown by someone who decides to do something
difficult or dangerous, even though they may be afraid.
General Lewis Mackenzie has impressed everyone with his authority and personal courage...
They do not have the courage to apologise for their actions.

If something is behind a thing or person, it is on the other side of them from you,
or nearer their back rather than their front.
I put one of the cushions behind his head...
They were parked behind the truck...

When you shut a door or gate behind you, you shut it after you have gone through it.
I walked out and closed the door behind me...
He slammed the gate shut behind him.