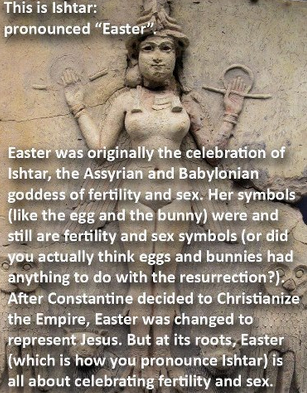 If you celebrate, you do something enjoyable because of
a special occasion or to mark someone's success.
I was in a mood to celebrate...
Tom celebrated his 24th birthday two days ago.

In many religions, a goddess is a female spirit or being that is
believed to have power over a particular part of the world or nature.
...Diana, the goddess of war.

Land or soil that is fertile is able to support the growth of
a large number of strong healthy plants.
...fertile soil.
...the rolling fertile countryside of East Cork. = rich

A person or animal that is fertile is able to reproduce and have babies or young.
The operation cannot be reversed to make her fertile again.

If you resurrect something, you cause it to exist again after
it had disappeared or ended.
Attempts to resurrect the ceasefire have already failed once...
This is a resurrection of an old story from the mid-70s.

A bunny or a bunny rabbit is a child's word for a rabbit. (INFORMAL)

A rabbit is a small furry animal with long ears.
Rabbits are sometimes kept as pets, or live wild in holes in the ground.